One of our favourite producers and one who we have stocked for over 15 years. Amazing quality. 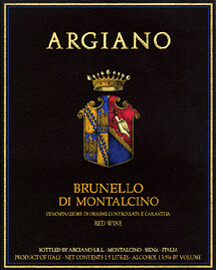 The growing season began with cool, wet weather. The flowering was generally good, but cooler than normal temperatures affected fertility in some cases, reducing yields slightly. In July, the weather turned hot and dry, with one rainfall mid-August relieving the stress on the vines. The ate-ripening Sangiovese, however, took advantage of 2 inches of rain mid September, followed by beautiful weather with good swings in temperature between day and night. Aged 36 months in 3500 litre French oak casks. Always one of our favourites the 2016 is another superlative release.
"The Il Poggione 2016 Brunello di Montalcino opens to a medium dark appearance with pretty Sangiovese shine and a little ruby sparkle. This vintage shows a slightly untamed or wild side with a dense and heavier fruit profile. The focus here is on blackberry, dried cherry, tobacco and even a touch of smoky tobacco or horse saddle. The wine shows the firm grip and tannic backbone that is a common trait in this vintage, especially with the vineyards on this southern, sunlit side of the appellation. I also get a considerable flash of acidity on the close, almost too much, that certainly needs a few more years to soften. You really need to wait with this one." 95 pts Monica Larner Robert Parker's The Wine Advocate
"I’m not sure how Il Poggione manages to remain one of the largest producers of Brunello, maintaining such a high level of quality and turning out some of the best wines of the vintage year after year - but they do. The 2016 Brunello di Montalcino is yet another stunning example. Depths of mineral-encased black cherries, sage, allspice, licorice, tobacco and crushed violets lift up from the glass. It’s seamlessly silky, even as the palate is peppered with tart red and black berries, nervous acids and savory exotic spices. This shows the density and weight of the vintage in a youthfully monolithic stance, yet with all the necessary components to maintain perfect balance. The 2016 Il Poggione seems to fold in upon itself through the finish, which is dark, mysterious and structured, with only hints of black tea and licorice to tempt the imagination. It’s a classic in the making." 97 pts Eric Guido Vinous
Also 97 points James Suckling

"This single-vineyard Riserva delivers a generous, abundant and determined personality. This is Brunello with a capital B. The 2015 Brunello di Montalcino Riserva Vigna Paganelli benefits from a warm and sun-soaked microclimate that is shielded from cold winter winds. You can taste the good health of the grapes thanks to those very direct aromas of black cherry, plum, tar, campfire ash and chalky mineral. The Paganelli vineyard is 12 hectares in size, with vines planted in 1964. The last time this wine was made was in 2012. Fruit from those old vines shape complex aromas, elegant tannins and bright freshness. Despite that handsome DNA, this is another new release from Il Poggione that will require more cellar age. I'd suggest drinking a bottle from this 40,000-bottle release after the 10-year mark." 97 pts Monica Larner Robert Parker's The Wine Advocate 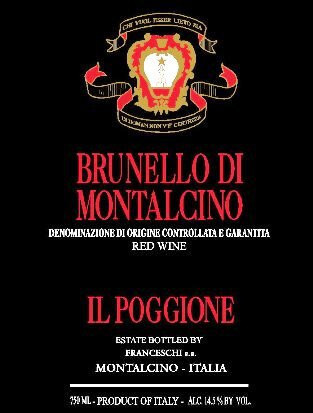